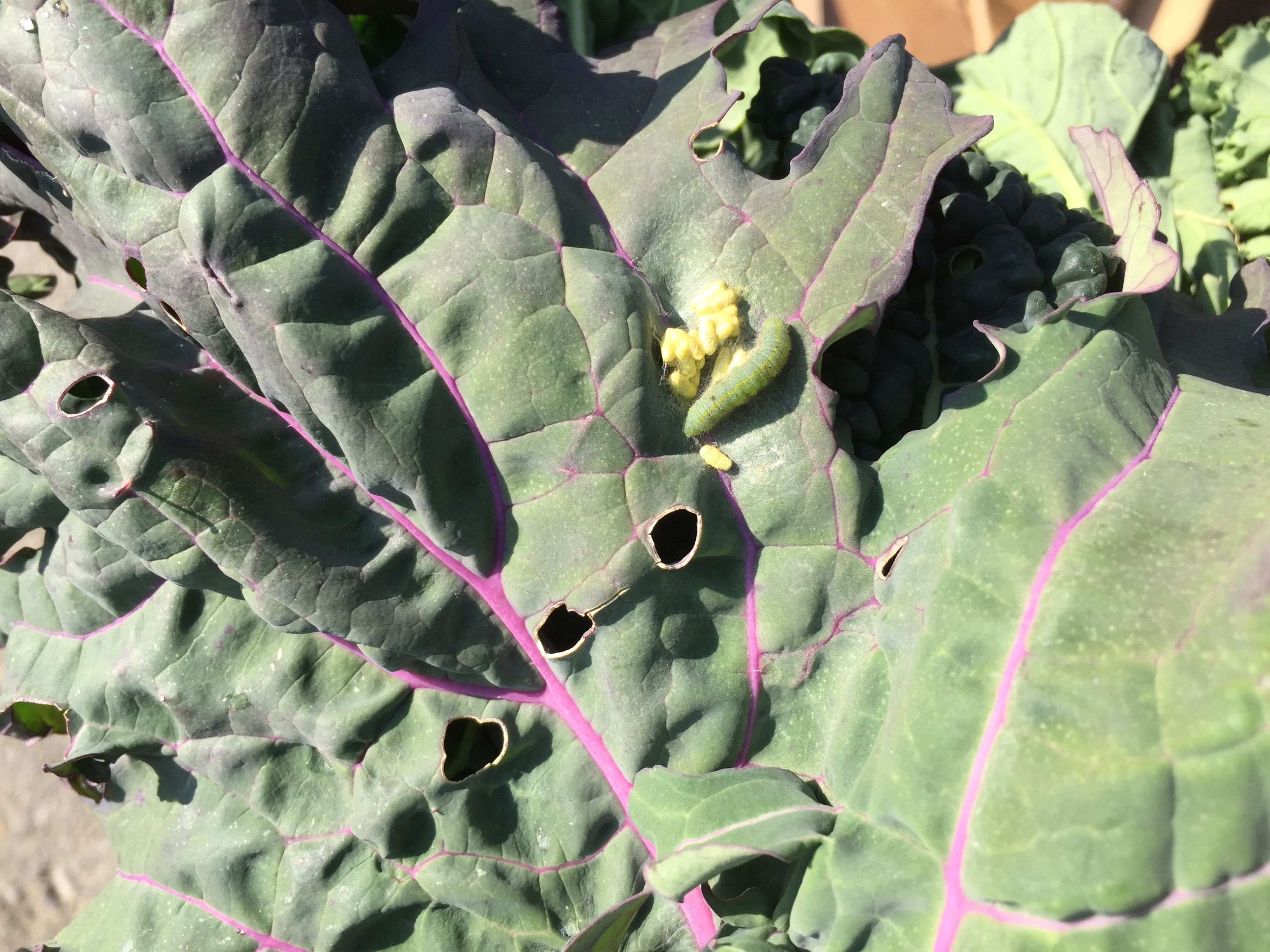 Photo Credit to Lauren Kaplan
No need to run for cover—unless you’re a cabbage worm. These are not your garden variety wasps! These wasps are mostly stingless, at least to humans. What looks like a stinger is really an ovipositor, used to deposit their eggs into or on top of crop pests, which they use as hosts.

Because of their small size, these beneficial insects often fly under the radar, and outside the notice of many farmers… but they are worth looking out for, as they are capable of performing significant ecosystem services, especially in organic farming systems.
ABOUT
Depending on the type of wasp, these parasitoids can help with managing a lot of herbivorous pests, including “aphids, beetle larvae, bagworms, cabbage worms, Colorado potato beetle, corn ear worms, cucumber beetles, cutworms, gypsy moth caterpillars, Japanese beetles, leaf-miners, mealybugs, Mexican bean beetles, moth caterpillars, sawfly larvae, scale, squash vine borers, tent caterpillars, tobacco budworm, tomato hornworm and whiteflies.” The family of Braconid wasps includes many aphid- and caterpillar-parasitizing species. The Chalcid wasps, including the familiar Trichogramma wasp (and the incomparably cool fig wasp), largely parasitize eggs of various foliage-feeding caterpillars. Ichneumon wasps are perhaps the most widespread, present in nearly all terrestrial habitats, and are aggressive parasitoids of herbivorous pests.
IDENTIFICATION
Ichneumon wasps, with their tiny waists and prominent ovipositors, look more wasp-like than Braconids and Chalcids, which—while generally varied in overall appearance— are generally so much smaller that it’s hard to tell what they look like without a magnifying lens. Chalcids can be as small as 1/64 of an inch! Due in part to their tiny size, it can be difficult to identify the presence of parasitoid wasps by spotting adults. Farmers who are tuned into crop plants and pests may more easily recognize parasitoid wasps earlier in their life cycle, at their larval or pupal stages.
LIFE CYCLE
Braconid and Ichneumon wasps pupate on the back of their hosts, which include aphids, armyworms, cabbage worms, hornworms and other foliage-feeding caterpillars. One study found that cabbage loopers on organic farms in California were host to 13 different species of parasitoids! The presence of these wasps is best identified by finding a caterpillar covered in white, tubular pupa or cocooned alongside a collection of rice-like pupa (see figure 8).
Chalcids, which generally parasitize eggs rather than larvae, are perhaps best identified by looking at host eggs, which turn black once parasitized, as in this corn earworm egg and these codling moth eggs.  Chalcid wasps commonly emerge either from infected eggs or chrysalis, both of which will become darkly discolored prior to emergence. Inconspicuous as they are, these tiny wasps are a highly beneficial insect because they effectively kill the host before it can do any damage—unlike, for example, the hornworm, which can turn a lot of foliage and fruit into a lot of frass before succumbing to parasitism.
HABITAT
Adult parasitoid wasps feed on pollen, sap, and nectar from plants with collections of tiny flowers. Many of these—such as coriander, dill, and other members of the carrot family; sweet alyssum; yarrow; buckwheat; and faba bean—can be planted as insectary rows or in hedgerows, and also provide habitat for other beneficials such as syrphid flies and minute pirate bugs.
Native species also provide important habitat. In the west, coyote brush was found to be a key species for parasitic Hymenoptera habitat, including all three families of wasps. Another source of native habitat is the widespread boneset, which prefers low-lying, wet areas of the east and south. In addition to feeding on nectar and pollen, adults will also use these plants as shelter from wind, areas to rest, mate, and pupate.
CHALLENGES AND COMMERCIAL USE
The plants that provide adults with sustenance and shelter are generally not the same plants that pest hosts prefer. This means that adult wasps will need to travel between their own habitat and host habitat. Given that they cannot travel very far, it can be a challenge to establish habitat within a few thousand feet of crop plants and hosts. Locating habitat in close proximity to the presence of appropriate hosts is ideal, as well-fed wasps devote more time to parasitizing pests.
Another challenge to providing good year-round habitat is that these wasps overwinter with the pupae or cocoons of host pests. The Big Bug Hunt suggests leaving a small amount of host habitat through the winter to provide shelter for the wasps that parasitize those hosts. This, however, involves identifying your particular wasps (or at least their preferred host species), which is no easy feat. It also requires leaving shelter for your pests—though if this patch of habitat is small, it’s possible to be able to monitor it for the quantity of overwintering hosts and presence of wasps.
In lieu of cultivating habitat for your own native species of parasitoid wasps, Trichogramma and a few other wasps are available commercially to provide annual pest control. Tips for successful release, establishment, and quantity per acre are generally available with purchase.
There is much we have yet to learn about these tiny wasps, including the degree of service they can provide, and in which kinds of agricultural systems. In the meantime, we can plant tiny flowers for them, and allow them to provide ecosystem services as part of sustainable farming practices. And we can continue to observe how they work on our own farms and for our own unique agro-ecosystems.