Lady Beetles: The Hardest-Working Ladies On Your Farm 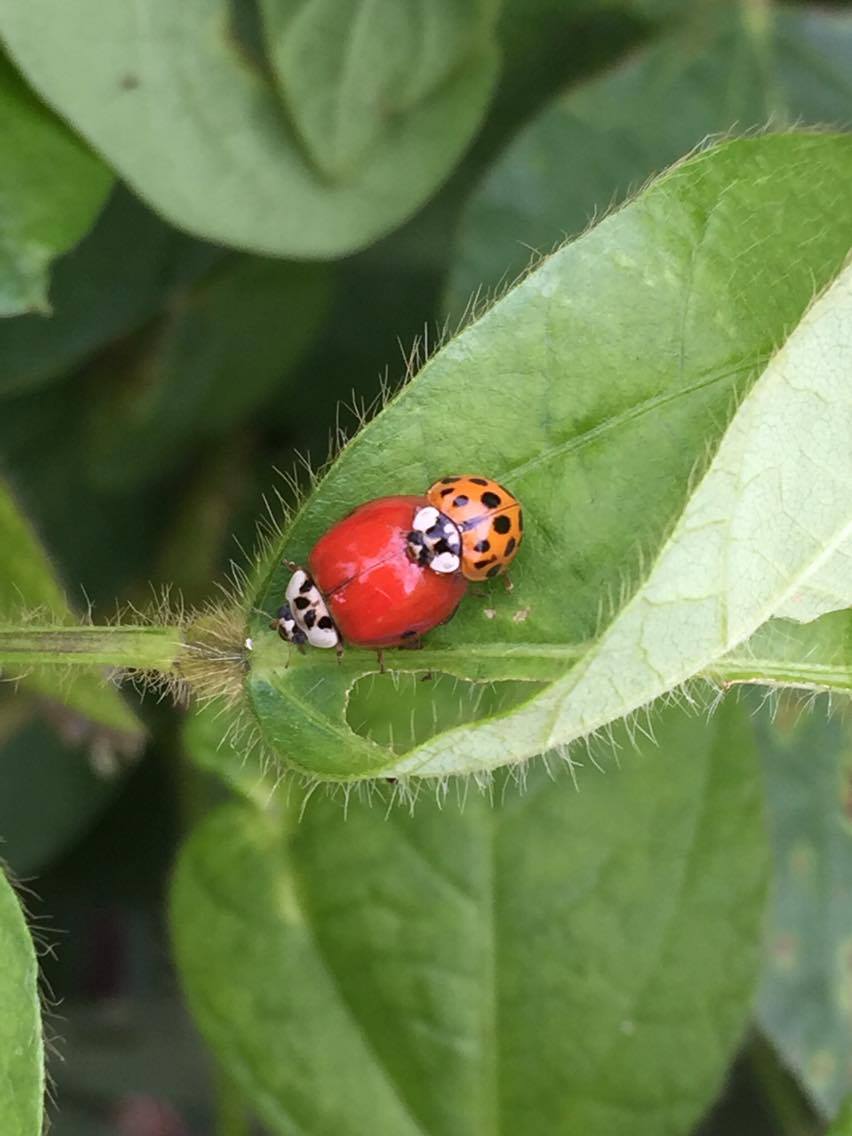 Photo Credit to Tamara Hanson, Windy River Eco Farm
Farms are crawling with bugs - especially those practicing organic farming methods. Pests may be the first bugs that come to mind, but many of these are beneficial insects, providing important services from pollination to pest control.
The next few posts will take a closer look at beneficial insects that provide important pest management services. Getting to know these beneficials includes knowing which pests they control, understanding how to provide habitat, and being able to identify them at all life stages. (This last bit is important, as I once worked with folks who were squishing lady beetle larvae, apparently taking the “guilty until proven innocent” approach -- oops!)
Let’s start by taking a closer look at one of the most familiar and classic of all beneficials: the lady beetle.
Commonly known as “ladybugs”, these familiar insects are members of the beetle family Coccinellidae. With 400 species present in the US alone, lady beetles are found in nearly all crop-producing regions across the globe. They are beneficial for every crop with aphid pests (of which there are 4,000 species). This post will address the lady beetle family generally, with only a few species-specific spotlights.
While most members of this family are insect-eating beneficials, Coccinellidae also encompasses the genus Epilachna, which includes herbivorous pests such as the squash beetle and Mexican bean beetle. 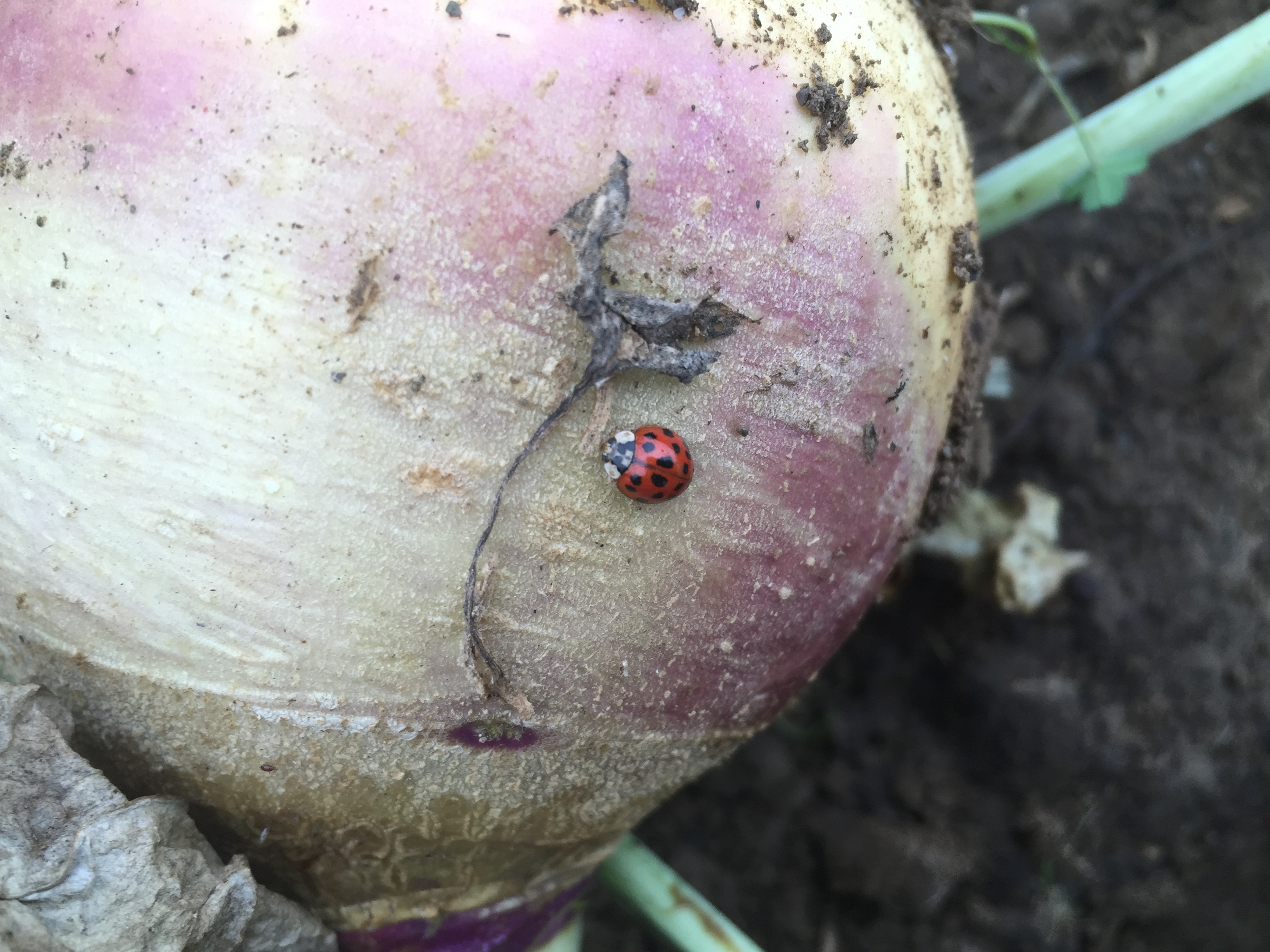 IDENTIFICATION
The appearance of the standard ladybug—red or orange with black spots on the elytra, as in the seven-spotted (Coccinella septempunctata), convergent (Hippodamia convergens), and Asian multicolored (Harmonia Axyridis) lady beetles-—is familiar. But adult lady beetles come in many shapes and colors. The flashy metallic blue lady beetle (Curinus coeruleus), native to the Caribbean, can be found in areas of Florida where it feeds on aphids and scale insects. On the opposite end of the spectrum, members of the genus Scymus are more diminutive, small and a dull black or brown in color.
Taking note of the coloration, overall shape, and appearance of the pronotum (the section behind the head that covers the thorax) are helpful markers for identifying species.
Larvae are often dark in color, spiky and tapered in shape, resembling tiny alligators, and easily recognized. Others, such as the larvae of the twice-stabbed (Chilocorus stigma) and pests of the Epilachna genus, have larvae that are more akin to sea cucumbers or something out of Fraggle Rock. Larvae of the genus Scymus, rather than being dark, have these wild waxy protuberances that make them look “sort of like a little white Chia pet”.
It is not necessary to know exactly which species of lady beetles you have on your farm to know that they are beneficial predators. It is, however, worth identifying your resident lady beetles to learn more about which pests they are uniquely suited to control. It is also worth singling out these few for closer examination:
The twelve-spotted (Coleomegilla maculata) and the three-striped (Paranaemia vittigera): With their elongated shape, striped or spotted pronotum and long legs, these more closely resemble a pink cucumber beetle than a common ladybug. This comparison is furthered by the fact that adult pink lady beetles, with a diet consisting of up to 50% plant pollen, are often found around cucurbit flowers along with their “pesty” look-alikes. But look twice before you squish! Suspicious as they may appear, these are still the good guys (or ladies).
The Asian multicolored (Harmonia axyridis) and seven-spotted (Coccinella septempunctata): While both are beneficial in that they will consume aphids and other pests, these species are invasive. Introduced from Asia and Europe (respectively), they will outcompete—sometimes by directly consuming—native Cocinellid species, and can become pests themselves. H. axyridis is generally identifiable by the M- or W-shaped markings on the pronotum. C. septempunctata’s seventh spot is usually a joining of two spots near the head, immediately behind the pronotum.
DIET
Both larvae and adults of Coccinellidae commonly consume aphids, with a single individual capable of consuming up to 5,000 aphids in its lifetime. Some species do not consume aphids, but prefer instead to consume scale insects, mealybugs, mites, whitefly, bollworms and broccoli worms, eggs and other larvae. Some also eat plant pollen, but most require live prey in order to become sexually mature adults.
LIFE CYCLE
This varies a bit depending on the species, but generally looks something like this: It takes around 3-4 weeks from egg to adult. Adult females will generally oviposit yellow oblong eggs in clusters near a food source, such as an aphid or scale insect colony. Adults can produce up to 1,000 eggs in their lifetime. Larvae feed for around 2-3 weeks (with progressive instar stages visually similar enough to be identified as such) before attaching their tail-end to a leaf to pupate. Adults emerge in 3-10 days, and are capable of reproduction shortly thereafter.
HABITAT
Lady beetles generally overwinter as adults, seeking warmth and shelter on south-facing surfaces of large objects such as rocks or the walls of houses. Some take refuge under logs, branches or vegetation. H. axyridis will seek shelter indoors, while others, such as H. convergens, will cluster together at higher elevations. Arboreal windbreaks or other wooded areas can provide sufficient shelter for overwintering adults.
CHALLENGES AND COMMERCIAL USE
Lady beetles, like many other insects, are sensitive to pesticides. Populations can easily be compromised or eliminated entirely with certain sprays and other chemical pest controls. Consulting local extension agents can be helpful in identifying resident species and obtaining information regarding sensitivity to pesticides and other chemicals.
Overall, minimizing tilling and mowing will reduce the killing of adults and larvae. Crops that are in the ground for more than a month allow for at least one complete cycle of lady beetle reproduction. Growing a diversity of crops and maintaining insectaries or perennial borders will help ensure a consistent food supply, habitat during the growing season, and winter shelter.

RESOURCES:
A good overview of some different species complete with high-quality photographs of progressive stages and markings for identification: http://www.austinbug.com/coccinellidae.html