How To: Run an Irrigation Distribution Uniformity Test 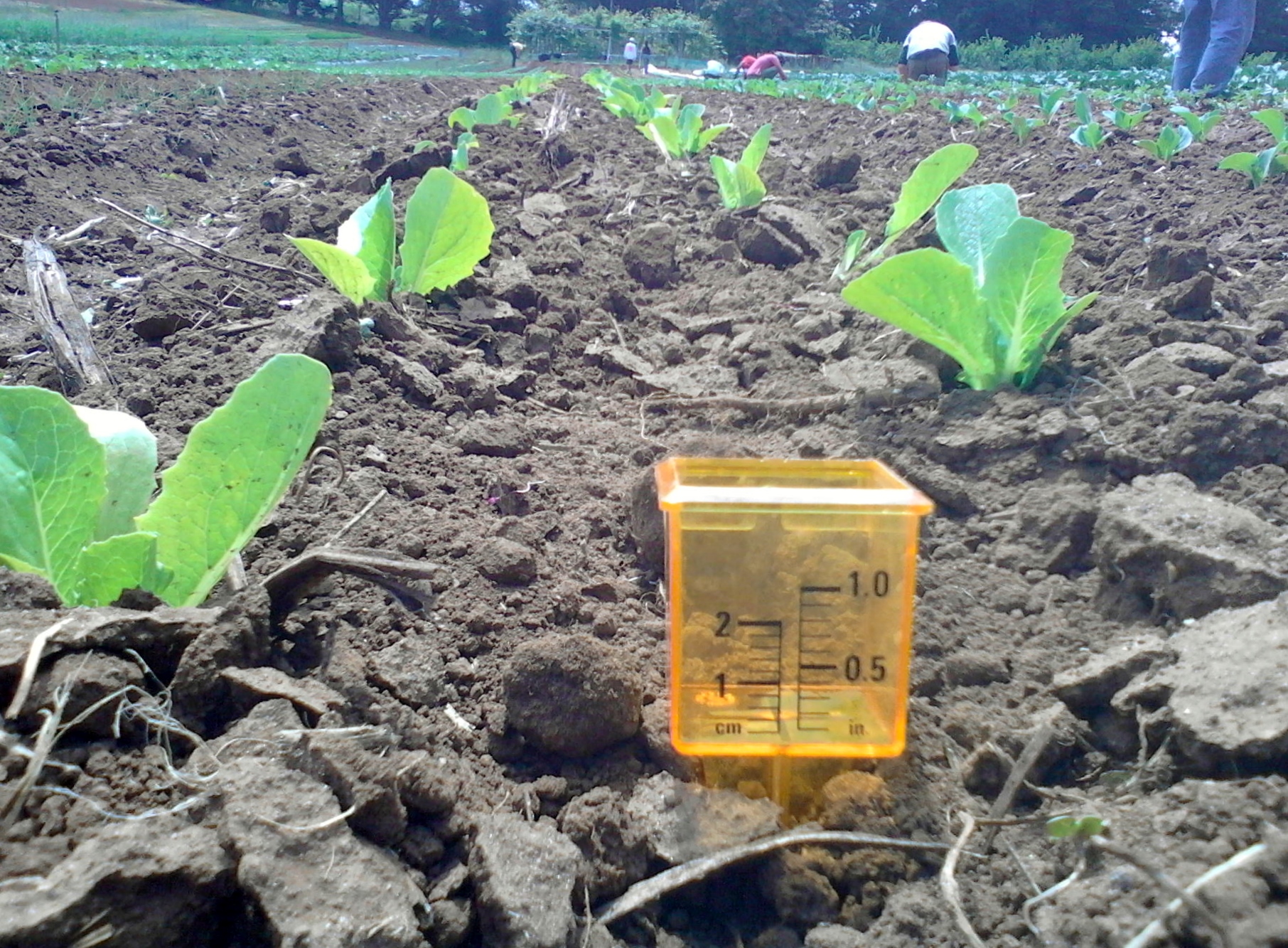 Unexpected blow outs in irrigation pipes and malfunctioning sprinklers are inevitable events that contribute to inconsistent water output. But, even when a system appears to be running smoothly, upon a closer look,  you may be surprised by the inconsistencies. Variable irrigations build upon themselves application after application- salts can accumulate, nitrogen can leach, and crops suffer. Running a simple distribution uniformity (DU) test can reveal how evenly water is actually being applied, enabling you to weigh the need for making improvements while also informing proper irrigation sets. Because uniformity has significant impact on yield and water usage, running the occasional DU test on drip and overhead systems is well worth the time.
Put it to the Test
Using the “Low Quarter Distribution Uniformity Method” for running a DU test is fairly simple, and can be incorporated into an already scheduled irrigation set.
Overhead System
1. Place catch-cups* throughout a block or field that will be receiving the same irrigation set. In a grid pattern, place catch cups at regular and even spacing (the more cups you use, the more data points you’ll have to work with).  Using a number divisible by four will make for cleaner math later on.
2. After the irrigation set, measure and record the volume of water collected in each cup.

Miguel Mayo, Jose. Sprinkler Uniformity of Distribution Test. Digital image.Teaching Organic Farming and Gardening. Center for Agroecology and Sustainable Food Systems, 2015. Web. 10 May 2016.
Interpret the Data
While in theory 100% distribution uniformity is possible, it’s not likely achievable due to various structural and environmental factors. Therefore, typically, anything that ranks at 80% or or above is considered acceptable. If your DU rate is less than 80%, the first step is to identify what factors are contributing to the inconsistencies.
Environmental Factors
While often out of our control, environmental challenges that negatively influence an irrigation can sometimes be compensated for. For example, on a windy day, you can widen the throw of impact sprinklers. If slope is something you're dealing with, installing flush valves at the end of drip tape lines can assist in maintaining equal water distribution throughout.
Structural Factors
Structural issues are often due to inconsistent and/or older equipment. As system materials age they become less reliable due to worn out nozzles and gaskets, inevitable leaks, and clogged emitters. Regularly cleaning filters, flushing lines, and updating emitters are a few ways to compensate for any variation; reviewing the map a DU test produces can directly point to areas in your set-up that need improvements.  Additionally, it’s also worth investigating the water pressure to ensure it’s balanced throughout the system.
*Catch-cups can be rain gauges, viles, even mason jars or tin can (as long as you have a way to measure the water collected in each one).
If you liked this article, and want to see more like it, enter your email in the subscribe box to the top-right of this page and we'll send you new blog articles as we publish them.