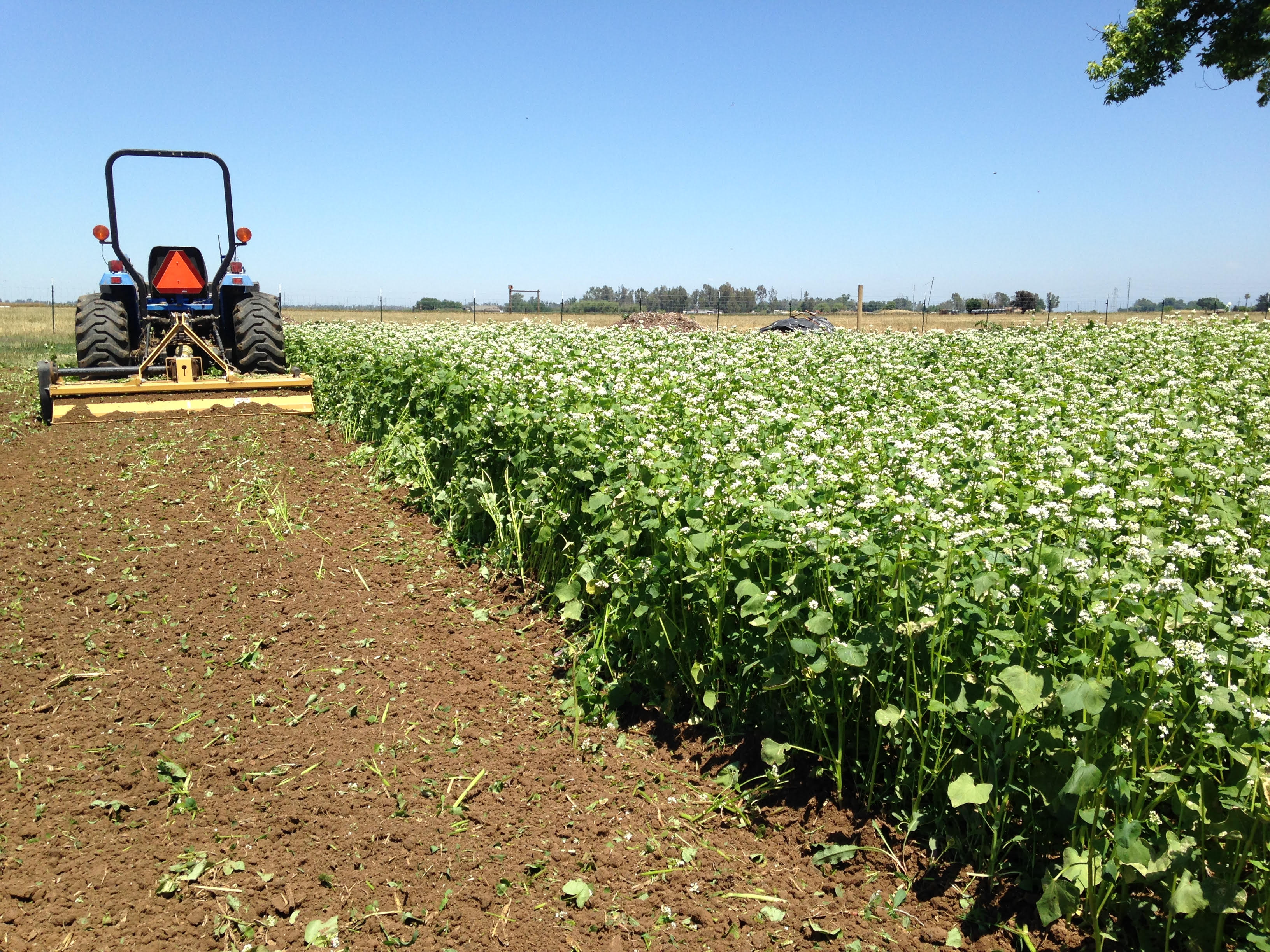 Photo Credit to Mitch Coppin, Trowbridge Flower Farm
Legumes, grasses, and cereals make up the majority of commonly-used cover crop species - but there are a few other non-legumes that have value in their niche strengths, particularly in diversified and small-scale farming. This post will take a look at a few crops that are champions when it comes to scavenging phosphorus, attracting beneficial insects, and serving as powerful biodrills and potent biofumigants.
BUCKWHEAT
FORAGE OR OILSEED RADISH 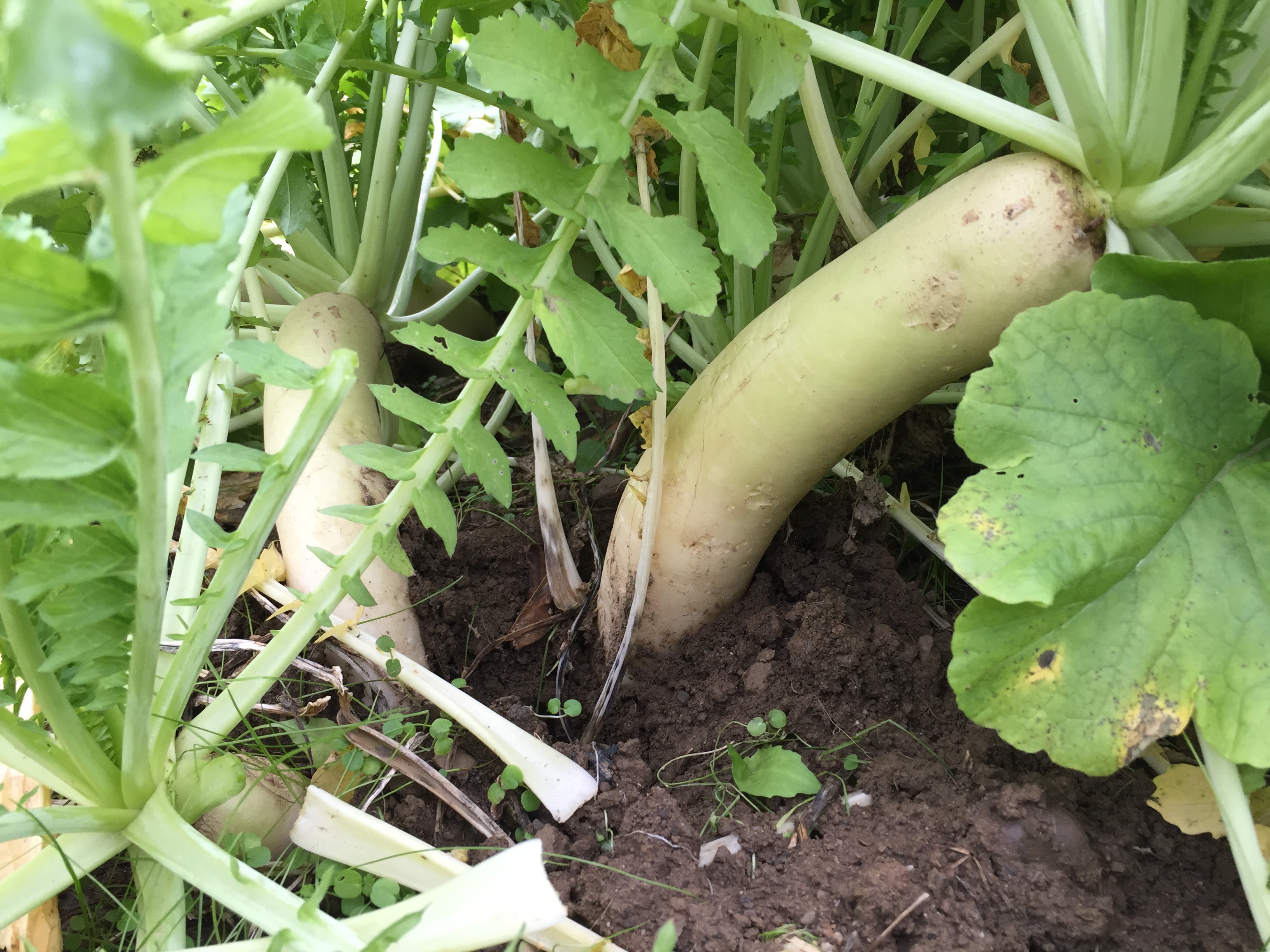 Photo Credit to Lauren Kaplan, Fishkill Farms
Mustards offer some of the same benefits as the forage radish, including nutrient scavenging and suppression of weeds in the fall (by outcompeting) and in the spring (by the release of toxic compounds after mowing and incorporation). They are similarly easy to incorporate and quick to break down, and should not be used in rotation with other brassicas.
Most brassicas, and mustards, in particular, can also be used in biofumigation. Nearly all brassicas produce glucosinolates, which are released when individual plant cells are ruptured. The degradation of glucosinolates creates toxic compounds -- some of which, including isothiocyanate, appear in commercial fumigants. These compounds can assist in managing soil pathogens and plant parasitic nematodes.
For effective biofumigation, it is recommended that brassica covers be treated like cash crops. Ample fertility and moisture are key to establish a healthy, robust stand of plants with sufficient accumulation of the compounds necessary for effective biofumigation. Decisions to terminate the cover are made based on having attained the critical mass of these compounds, and not (as with many cover crops) on factors such as soil moisture or the schedule of the following cash crop. Close adherence to recommendations for terminating and incorporating the crop (including flail mowing, rototilling for shallow incorporation, rolling, and ensuring adequate soil moisture for distribution of key compounds) are also integral to biofumigation success.

There is much we have yet to learn about the effectiveness and economic feasibility of biofumigation. Still, it is an exciting field, and worth looking into if you’re open to experimenting with using your cover crops in organic farming and control of pathogens and pests.

For more on brassicas and mustards, check out SARE’s comprehensive chapter (including a summary of studies done on the risk of nematodes when growing brassicas, a run down of the major species, and a note on brassica covers doubling as cash crops). University of Missouri extension offers a nice, comprehensive overview of buckwheat (including variety selection and field prep) as both a cover and cash crop. (If buckwheat as a beneficial insect habitat appeals to you, you may also consider incorporating phacelia, a winter-hardy plant with nutrient-rich nectar and great value in providing habitat for pollinators. Click here for a nice fact sheet on phacelia.) Follow the links to view Cornell’s succinct and practical guides to buckwheat, forage radish, forage turnips and rapeseed, spring mustard and fall mustard.